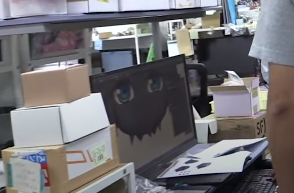 During a livestream at Anime Expo Lite 2020, Japanese company Good Smiles Company, who are known for producing Nendoroid figurines, including Kingdom Hearts Sora and Riku, appear to be working on another Kingdom Hearts figurine. In a tour video of their headquarters at Akihabara, several shots for a new Nendoroid can be seen in development that resemble Kingdom Hearts III Sora. You can view some screenshots from the tour in our gallery below.

The product has yet to be confirmed by Square Enix or Disney. You can check out the tour video on Youtube or watching it below. (Fast forward to the 10:30 mark in the video)