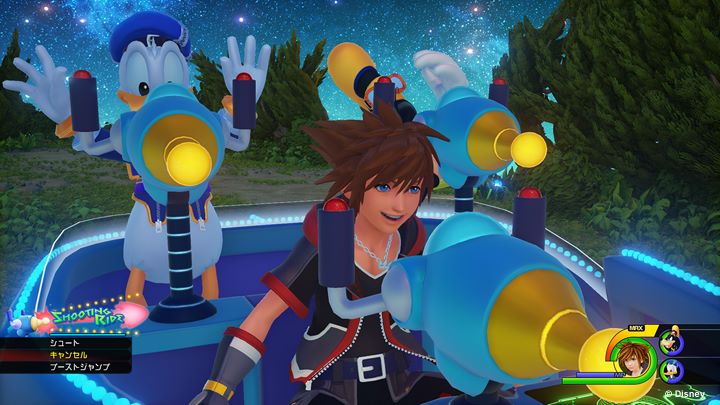 Tetsuya Nomura discusses Attraction Flow in Kingdom Hearts III; says it'll be a surprise depending on the area

During an interview with Atomix, Kingdom Hearts series director Tetsuya Nomura discussed the Kingdom Hearts III mechanic known as "Attraction Flow." This mechanic has been seen in previous trailers for the game, where Sora can be seen summoning different Disney Park-inspired rides that he uses in battle. Attraction Flow hasn't been seen in recent trailers, so many fans have been wondering whether it's still in the game, but this interview with Nomura confirms that it's still a part of it. He says that the player can't choose which Attraction Flow to activate, and that it's a different surprise depending on which area you're in. So, when you see the signal for the ability is ready, it'll be a surprise of finding out what will happen. It's not something you can activate in any area you want.

Nomura mentions that Kingdom Hearts III will have many options when it comes to attacks, such as Keyblade transformations, magic, and head to head combat. He says that Attraction Flow is another ability in the array of different abilities you can use.

So, in a way, they don't want to force you to use just one kind of attack, but Nomura's sure that we'll enjoy the Attraction Flow system, which has glowy and surprising animations, or, in other words, a visually compelling presentation in which, without the use of many buttons, you'll be able to enjoy a visual spectacle on screen.

Thanks to neil98 for translating!