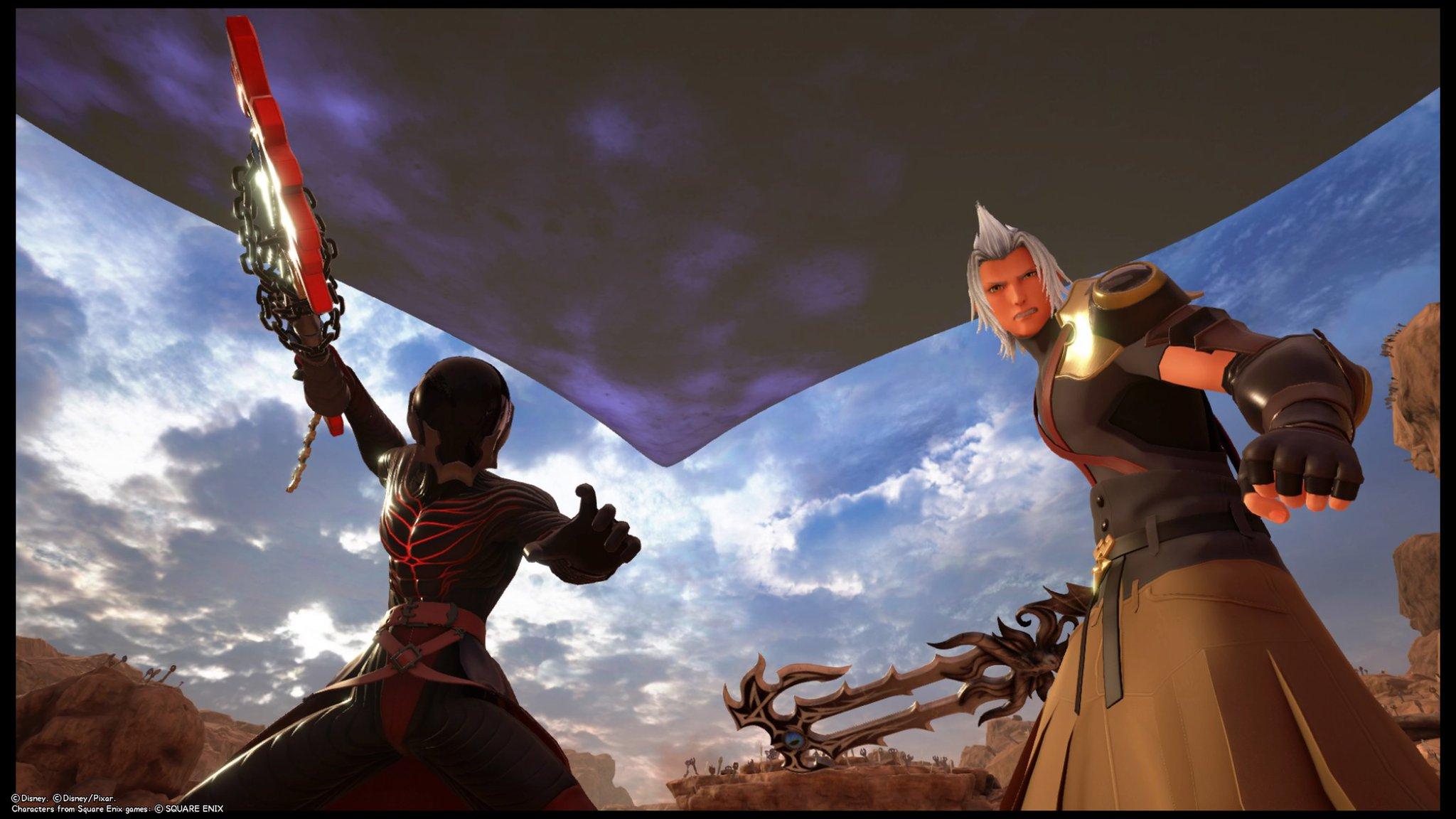 The translations for Terra-Xehanort's story "Golden Eyes" and Vanitas' story "Vanish Into the Blue" can be viewed below!

Kingdom Hearts hovered in the sky.

This was the badlands, not far from the Keyblade Graveyard. Terra readied his Keyblade against Master Xehanort. His breaths were ragged, and impatience showed in his expression.

“Admirably done. I knew this was a journey you could make—over the unseen wall that divides darkness and light. And I was not wrong, Terra!”

From the beginning, Master Xehanort had held but one goal: to discard his aged body, and take Terra's as his new vessel.

At the Mark of Mastery exam, he had once said to Terra: “Yes… You are indeed strong. The darkness is nothing to fear.” He was merely planting a seed. Even so, that seed was now taking root.

Terra rushed at Master Xehanort, Keyblade in hand. Vanitas moved to block his way, their Keyblades clashing together.

“You see how powerless you are to save them? Savor that rage and despair. Let it empower you!” Master Xehanort boomed. He was even smiling.

Yes, almost there—just a little longer. It was happening.

Master Xehanort pushed his Keyblade into his own chest, and light began to pour out.

“At last, our moment is here. Out with the old and brittle vessel, and in with a younger, stronger new one! I swore I would survive… and be there to see what awaited beyond the Keyblade War! And now it is your darkness that shall be the ark that sustains me!”

Terra fell to his knees, summoning his armor—perhaps in an attempt to protect himself. But, it was too late. The armor crumbled to the ground, and the body within looked up.

His hair was dyed silver, his eyes glittering gold. That was the moment that Master Xehanort took Terra's body under his control.

“This heart belongs again to darkness. All worlds begin in darkness, and all so end. The heart is no different. Darkness sprouts within it—it grows, consumes it. Such is its nature. In the end, every heart returns to the darkness whence it came.”

Terra-Xehanort started walking—only to find himself caged in by a barrier. He turned to find the suit of armor, whose owner should have been long gone, standing tall and wielding a Keyblade.

“What?" Terra-Xehanort yelled. "Your body submits, your heart succumbs—so why does your mind resist?”

The armor—the Lingering Will—put up a fierce resistance, and an intense battle began. Finally, the Lingering Will slew Terra-Xehanort. In that instant, a torrent of light and darkness exploded out, engulfing them both. When it faded, that armor was the only thing that remained in the badlands.

And so, Terra-Xehanort stood alone in Radiant Garden.

The one calling out to him was Aqua. Ironically, it was her voice that awakened Xehanort.

“Terra's heart has been extinguished—smothered by the darkness within him.”

Vanish Into the Blue

to you, the name Vanitas shall be given.

Who am I to you? What do you think I am? You can only exist as light because I am our darkness. Right? I am both you and not you at the same time. I bet you never even imagined you had darkness inside you, huh? But darkness is in everything. Look, it's there right by your feet, isn't it? Your shadow. The stronger the light, the deeper the shadow it casts. And that shadow will pull the rug right out from under your feet.

As soon as I was split from you, I stood alone in the badlands. So close to the Keyblade Graveyard, the badlands are marked with the faint traces of battle.

I’ve known ever since the moment we were split why I came to exist. I am a dark fragment of a heart—a vessel for negative emotions.

In the tearing winds of the badlands, I clenched my fist and closed my eyes against a painful emotion. As I did, a black shadow began to rise from behind me. I looked up at it, and red eyes shone from the shadow as it formed into a monster.

I reached out to the monster, and it wound around me like a playful kitten. The monster—the Unversed—was new to existence, just like me. I swung my Keyblade down on it. The Unversed vanished without even a cry.

The Unversed—the name means "one not versed in life." Does it really? I don't care whether it means anything at all. The monsters are both me and not me at the same time. Hey, just like the two of us, right? I don't care which of us is the real body.

I wonder how many negative emotions there are in the world. If you think there's only rage and hatred, you're wrong. There's sadness, loneliness, anxiety, envy—they are, however, all bait for hatred.

Feel the hate. Feel the rage. Of course I should hate my existence. You've hated yourself too, haven't you? I hated you, Ventus. I tried to merge with you, and for a moment I faded away.

Did I really hate you? Or was that hatred really directed at myself? It doesn't matter anymore.

Now I'm back in this world, despite having faded away once before. Someone is using me again. Looks like Xehanort wasn't satisfied just bringing me into existence. I hate Xehanort, I hate Ventus, I hate all of you, I hate the entire world, and I want to fade away again. That's the way of life I have chosen.

You see, I didn't ask for this. To be sifted apart, nice and neat. We should be free to choose. Not just light, not just darkness. We decide what we are, and that's exactly what I did.

I came from emptiness, and I will return to emptiness.

What is emptiness? It's neither darkness nor light—it's something in an even deeper abyss…