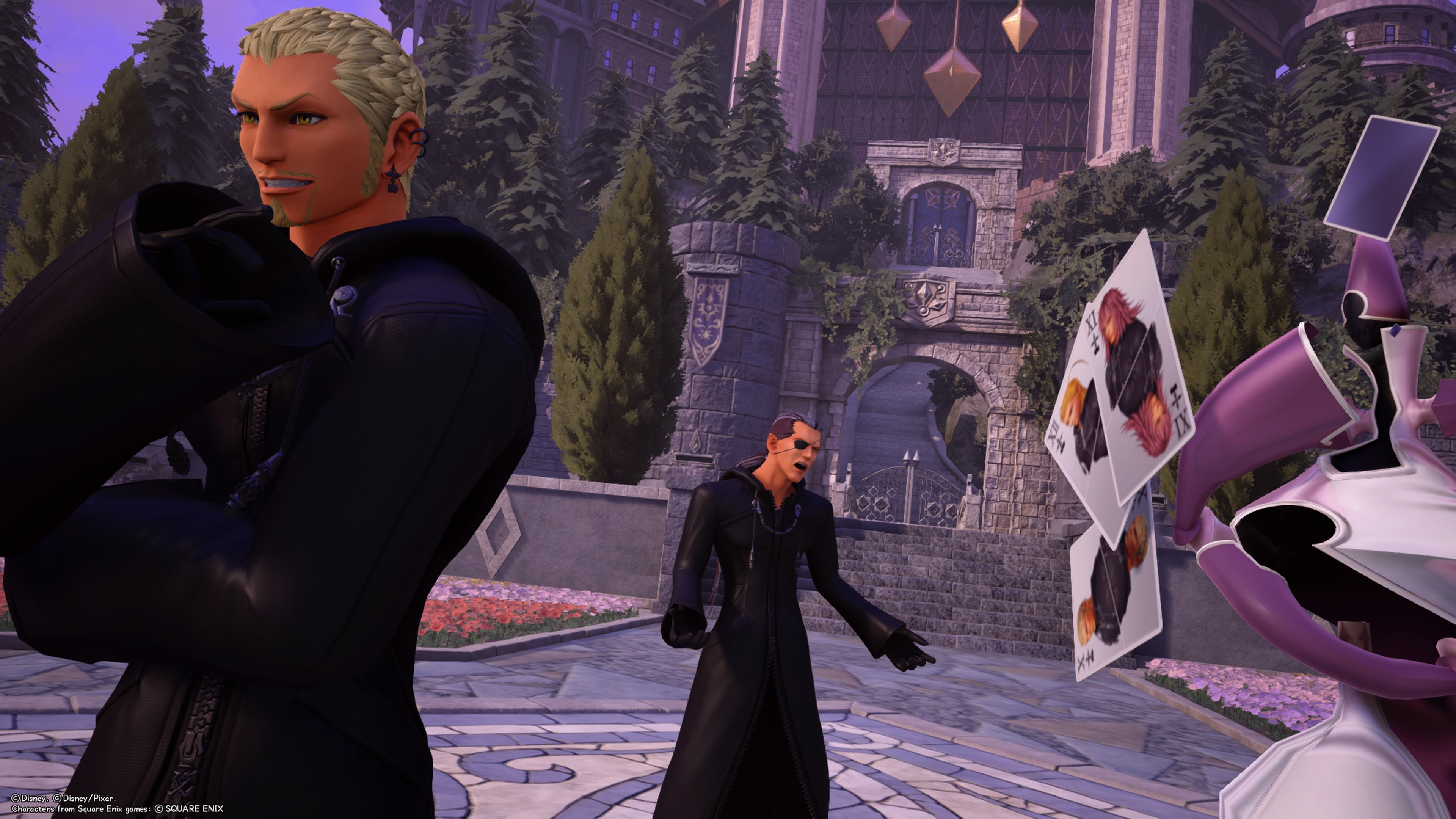 The Kingdom Hearts Series Character Files has received more story translations. All of translations this time are courtesy of Twitter user petalscythe!

The translations for Xigbar's story, "The Fool", Luxord's story, "Tumbling Dice", and Demyx's story "Tweet of a Substitute" are below:

It was a long, long time ago.

People all over the world lived peacefully, bathed in a warm light. But before they knew it, a battle broke out over the light. As a result, everything returned to nothing. However...

It was so long ago that no one even knows how long ago it was. But maybe this story is happening in the present? Or is it that distant past?

Your face tells me you have no idea what I’m talking about. It’s all right, you don’t need to understand it yet. It makes no difference to me.

You know it’s the height of stupidity to judge a person based on appearances, right? Well, maybe the box is the same way. Is the black box really black? What kind of black? Is it even black at all? The simpletons are just looking for a regular black box. They don’t understand what kind of box it is or what’s in it. There’s a major difference between “knowing” and “understanding”.

So, the box. I guess you wanna know how I ended up losing it, huh? What do you wanna know? Well, I say that, but I’ve already said as much as I can about all that. You know, the stuff about knowing versus understanding and all that jazz. And of course, it’s possible that the contents are a secret no one knows about. You could even say it’s a surprise. You’ll see.

How about a thought experiment? Say you were told this world was ending tomorrow. Would you just give in and wait for the end? Or would you get all fired up to do something about it? Think back to the black box. What kind of black is it? No one knows. And the end of the world? How would you expect anyone to know how that pans out either?

Think back to when the man called Xemnas originally opened the door to this world’s Kingdom Hearts. When and where was that, exactly? How long have you thought that the flow of time, from then to now, was continuous?

Is time really continuous in the first place?

Ah, now you look like you don’t believe me.

But how else would you explain it?

This world is Olympus. The brave hero that Sora relies on for all his hero-related needs lives here.

What constitutes a “hero”? Well, depending on what world you’re in or what time period you’re asking, the answer differs. Kind of like how Keyblade wielders differ.

So, what kind of Keyblade wielder are you, Sora?

“All this altruism is giving me the warm and fuzzies. So then, does having a heart of light come with an extremely good insurance policy?”

“Just say what you mean.” Sora glared at me.

“Oh, but I did though. No good will ever come from putting other people first.”

The hero beside him, Hercules, chimed in too. “I was able to save Meg’s life because I was ready to risk my own.”

“Because you’ve got friends in high places, you mean. Tricks like that don’t fly for your average joe.” I laughed scornfully at the two of them.

“What do you know? You weren't even there! If you were, you'd admire Herc's courage.” Sora said, and his eyes were full of his usual light. He has good eyes—I’ve always thought so.

“I don't admire one guy leaping into danger if it means someone else might have to jump in to save him. You’re all just lining up to lose out. Dooming others to take the fall with ya.”

How much of my true intent is getting through to you? If it doesn’t reach you at all, I’ve got a problem, but come on, you could at least take some of it to heart. These kids and their heart-guided Keyblades. I’ve seen more than enough of you go down the path of self-sacrifice and it never ends well.

“Oh, and you can spare me the usual party line. Yes, hearts are powerful when they’re connected. But if you put too much of that power in one place, some of those hearts might end up breaking.

As usual, I said just what I wanted to say and then turned my back on him. Sigh, but what if it’s still not enough? These Keyblade fools are stubborn bunches, after all.

“Still, Sora, that doesn’t mean you should change. Accept the power you’re given. Find the hearts joined to yours.”

Although, I’ve gotta say, it’s not like I’m doing anything differently here. Connected hearts and guided hearts—the two hearts have some similarities, but they’re different.

“Why would I ever take advice from you?”

“As if! You don't have any choice but to follow this sweet little trail of bread crumbs. And at the end, you’ll finally realize what destiny has in store for you. In fact, your reward may be just around the corner. You’re so close!”

And with that, I disappeared from Sora’s sight.

I’m so close to my reunion—and with it, fulfilling my mission.

May my heart be my guiding key...

Do you know how to win any wager?

If you go into a match knowing you’ll win from the get go, then it’s not a wager. If you know you’ll win, then what’s the point in betting? I am always considering the possibility of losing. That is what it truly means to be a gambler.

Of course, when you attain that level of strength, you will never lose big—knowing when to walk away is another important component of gambling. You cannot simply stop after one match. You must fight again and again. Only when the final play is at hand do you know the result of your bet. So you see, losing here today does not mean I’ve lost entirely. While one yet lives, there is always a chance of victory.

And finally, the best gamblers do not gamble. There are those who would wager their lives on a bet—they bet it all on greater rewards, risking greater losses. Perhaps it is not a game to them. I would not recommend playing against an opponent like that. Although I have managed to win against such opponents, it requires immense strategy, so I would perhaps not say that I often come out on top, particularly in recent times.

You should not endeavor to turn the tables at the last second to bring about crushing defeat, but to steadily rack up smaller victories along the way.

Now then, who shall I wager with today?

Why’m I in the Organization? Well, I mean, there’s lots of reasons, but—oh, right! I wanted friends, right? Oh, no. Wow, actually no, that sounded way uncool but… now I’m thinking back on it and I’m just like, yeah, I guess it kinda was like that, huh.

Aside from the whole old guys’ club going on, it kinda seems like there were a lotta tight-knit groups in the Organization. Y’know, like Axel and Saix, Marluxia and Larxene, Zexion and Vexen, and Xaldin and Lexaeus? And I guess in the end, I hung out with the old guy a lot.

Yeah, so it’s not like it’s a big deal, seriously that’s it. I hate fighting and jamming out is way more fun. Sad stuff, painful stuff, why would I wanna do anything like that? I mean, I guess there’s the stuff you’ve gotta do to survive, but if i can, I’d much rather live a life on easy street, you know? That’s what I’m talking about.

I never thought Vexen would ask me for help and I mean, I can’t say I’m a fan of, you know, doing things, but I figured it’s better than sitting around on the bench like that.

So, just carrying stuff around? I can do that! It’s Demyx time!

But yeah, it’s just like he was always saying—y’know, the “may your heart be your guiding key” guy?

Hey, but wait, what’s it supposed to be guiding me to again?