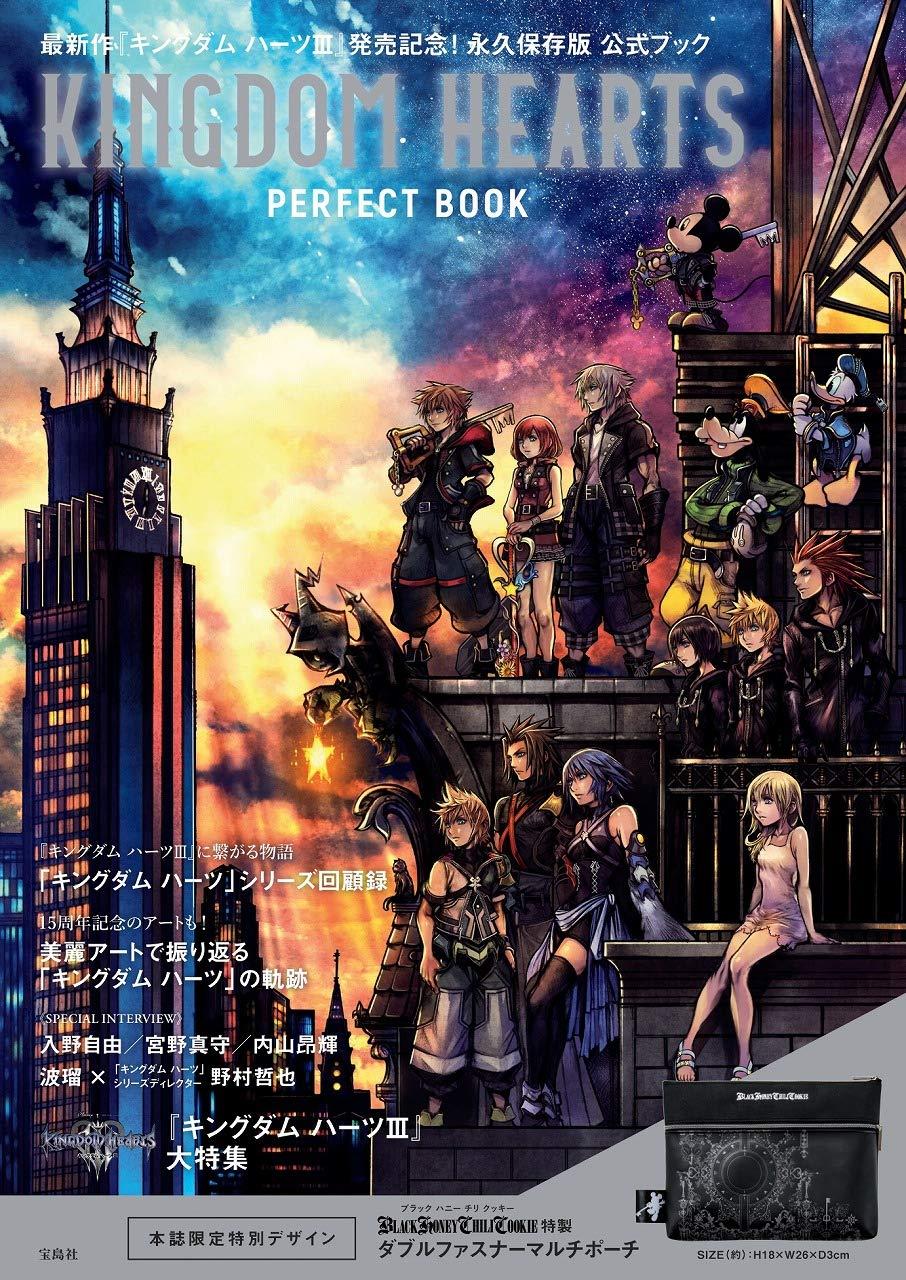 The Kingdom Hearts Perfect Book that was released on December 28th features an interview with Kingdom Hearts director Tetsuya Nomura. We are currently translating the book and will report once we have translated.

An excerpt from the interview has been translated already by @aitaikimochii about Nomura's stance on the story. You can read it below.

UPDATE [Dec 30, 2018]: The full interview is now available thanks to translations by NihonScribe, Solis, and Mio-chan. The interview features Japanese actress and idol Haru talking about her history as a fan of the series and her favorite aspects of it, as well as featuring Nomura talking about the future of the series, how Frozen was included in the game and even about the story beyond Kingdom Hearts III. You can also take a look at some scans from the Perfect Book towards the end of the article, thanks to KH13 use @Iarumas !

“It was a present from my mother.”

With us is Haru, an actress who has been in many dramas and films. Though she is not a core gamer, when it comes to Kingdom Hearts she has been a big fan of the series ever since she was a child.
She has wanted the chance to talk about Kingdom Hearts, and now Haru is being interviewed as well as the director of Kingdom Hearts, Tetsuya Nomura?!

Q:Could you tell us how you got into the [KH] series?

Haru: I first played the series when I was around 3 or 4 in elementary school. I had an older sister, but we didn’t play much games together. My close friends played games, and it was a well known title that I couldn’t choose . . .But during that time as a student it was also my birthday, and as I was given a PS2  and it was set up for me. My mom then gave me the game as a present. My mom wasn’t particularly into games and didn’t know much about it, but she probably chose it because it had Disney characters in it.”

Q:Did you play the game with your older sister?

Haru: It was mostly a game I played by myself. What kind of game is this, and how did the situation become like this, “Apparently it seems like Mickey is in this,” are the first impressions I remember having while playing the game. When I couldn’t play the game it was difficult and I became really impatient. . . At that time, I became that kid who would think, “I need to hurry and return home so I can play the game!” [laughing]

Q:What was it that got you so invested that you would have thoughts like, “I want to hurry home to play the game!”?

Haru: It really was the story. The more I played the better I got and it was fun progressing further, and that allowed me to be taken in with the feelings the story presented and get invested. It always felt like the next area I entered would be where I would beat it! But that wasn’t it. After the story there were more challenges and fun things to face so I kept playing. If I collected enough items to create the Ultima Weapon, the strongest Keyblade, and I fought the secret boss Sephiroth. The heartless in the other worlds became stronger, but Sora and his friends also grew stronger and by the time I entered The End of The World, it was easy to defeat the Invincible and I kept playing. It was interesting becoming more powerful in this way.

Q:You told us a little about the Keyblade, but which Keyblade did you appreciate the most?

Haru: It had a good reach, which is why I was interested in the Ultima Weapon, but the one that I used to prefer the most was Pumpkin King. It was very nostalgic. As a kid I had the thick Ultimania (strategy guide), and it had a lot of pictures and various content so I would read it often. At that time I had no idea about the process of making a game, so I was looking at it from that perspective and I would think, “So from this picture this is how it came in the game?” It ended up being very fun to read.

Q:[KH] has a lot of characters, but could you please tell us which ones stand out to you the most?

Haru: That is a tough question [laughs]. I like Sora, and I definitely like Roxas. Sora’s deep relationship with Riku and Kairi is something I’ve come to like. But what stood out to me actually was “358/2 Days,” with Roxas, Axel, and Xion, all three of which I love. When the game was first released and I heard that Sora wouldn’t be in it much, I thought “What?!” But after I tried it was really interesting. The hardware was on the Nintendo DS, but despite the gap in graphics compared to the PS2, I thought the story was really engaging and overall was done really well.

Q:Speaking of [358/2 Days], for you is the most memorable scene the ones where they all appear?

Haru: Yes, that’s right, the scene where they are eating ice cream. Xion is a very tragic character and I really like the scene where she comes out. In the beginning of [KH2] Roxas states, “It looks like my Summer vacation… is over,” was a strong scene as well, which made the beginning emotional for me, despite being a long tutorial.

Q:For some fans, they would say that Axel is the hero of this work.

Haru: That’s true [laughs]. He is always getting the worst jobs and even though he does his best, he is not rewarded and keeps pushing forward anyway. Maybe Kairi will be placed in a position to be the heroine. Besides that, a very strong enemy was the Phantom boss that appeared in Kingdom Hearts I, and I remember struggling against him.

Q:I’m sure you thought of what will come of Roxas, Xion, and Axel after all this, but what do you want to happen to them?

Haru: I want all three of them to be happy but… if they exist, then Sora would disappear I think, therefore I have mixed feelings about that outcome.

“I was able to explore my favourite world, Hercules”

Q:I see. As for my next question, which Disney world is your favorite?

Haru: I like a lot of the worlds such as Aladdin, but I was extremely happy when my favorite worlds like Hercules and Mulan appeared in the game. Besides Hercules and Mulan, other Disney properties like the princess films are ones I liked seeing, and as a kid many of of my friends were happy to see them. So it was really fun to play through my favorite worlds in the game.

Q:So you had a lot of Kingdom Hearts fans around you?

Haru: Yes, there were “Kingdom Hearts Fans” around me. My coworkers were fans of the series, and others became fans later. Even other actors from my dramas became involved, and the number kept rising. “Did you beat Sephiroth in KHII?!” is something we talked about a lot.

“I’m also thinking about the story past KHIII” (Tetsuya Nomura)

Q:Today, Mr Nomura, the KH series director, is here with us. We would like to ask him some questions about development on KHIII, but have you already watched the trailer for KHIII?

Haru: I did watch it! The last time I played on a big screen was KHIIFM, which at the time we still used a CRT TV, so the game being on the PS4 with graphics improved already makes me excited enough. There were many varieties of motions and animated cutscenes that extended from KHI to KHII, so I’m really looking forward to KHIII!

Q:Which scene caught your eye the most?

Haru: There are many scenes that I’m interested in, but the number one would be when I saw that Frozen will be in the game. I’m guessing the development of KHIII has been decided a long time ago, but I’m wondering when they decided to include it. I even thought of the possibility that the inclusion of Frozen in the middle of development made the development time longer… (laughs)

Q:Mr Nomura, what are your thoughts on this?

Nomura: Usually when we think about making a game, we choose from works already available to the public. However for Frozen, when we were selecting the worlds, Disney showed us the preview before it was finished, and we liked it enough to continue the discussion to include it in the game. We decided on the inclusion before the movie was premiered, so we were lucky that it was a huge success (laughs)

Haru: The series has been going on for more than 10 years, but do you decide to make stories of the past ahead of time, like KHBbS?

Q:Then [that] refers to something in the future in Kingdom Hearts 3? Or are you referring to something of the past?

Nomura: As referred to our previous conversation, I can’t pinpoint only one storyline as I have a multitude of potential things lined up. If there’s a future, then there is also a past -that’s kind of concept I tend to think about. At the moment, the smartphone game “KH UX” contains a story that happens in the past, and within the timeline that follows after that, I am able to think, “Oh, so I guess I should expand upon this part now” and decide on what exactly to flesh out.

Q:Will there be more to the story that will follow the new Kingdom Hearts 3 game?

Nomura: We’ve received comments such as, “Oh come on, just finish the story already!” (haha). However, if you play Kingdom Hearts 3, I’m sure there will be people saying, “Hurry up and give us the continuation now!” and that’s the type of story I think we have created with this game.

Q:Thank you very much for your time, Mr. Nomura. To close up, Ms. Haru, please give a message to your fellow Kingdom Hearts fans reading this.

Haru: The Kingdom Hearts series is a very long story and has complicated character relationships, so I would also like to read this book to review and prepare for when I play KHIII!

What do you think about the future of the Kingdom Hearts series? Let us know in the comments below!