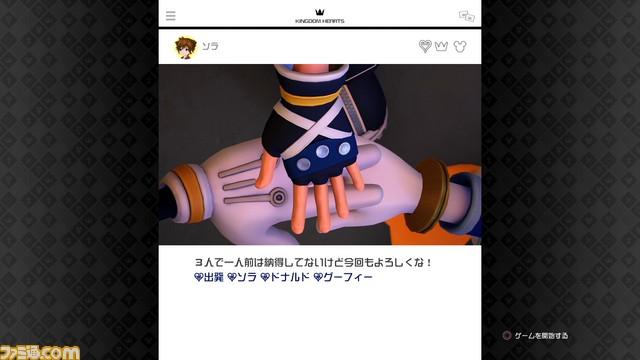 Tetsuya Nomura talks about the possibility of free and inclusive DLC for Kingdom Hearts III, prioritizing the next title, and rethinking simultaneous worldwide releases after recent leaks

We have translated the third and final part of Famitsu's exclusive interview with Kingdom Hearts III director Tetsuya Nomura!

In the previous parts, which you can read here and here, he talked about many interesting aspects of the game, including the requirements for unlocking the secret movie, the power of awakening, how he wrote the scenario (including dialogue) of the game himself, and the new Instagram-like social media present in-game that Sora and Riku can post on with their Gummiphones.

In this part of the interview, Nomura talks about how he would rather publish a free DLC with extra content all at once rather than in an episodic, divided style, and how he'd like to give priority to the next title rather than DLC. He also commented on the game's leak earlier in December, shedding some light on the number of copies of the game actually leaked and how this unfortunate event has led him to reconsider simultaneous/near-simultaneous worldwide releases for his next title.

You can read the translations below, thanks to KH13 Staff @Mio-chan and Solis!

——Speaking of item names, Toy Box Keyblade’s, “Fabo Deputy” [T/N: "ファボデピュティ", pronounced "Fabo Depyuti" in Japanese] is a strange name, I’m intrigued. It has another name before, hasn’t it?

Nomura: Before, when it was in development, we published the name “Infinite Badge”. Fabo Deputy is short for “Favorite Deputy” (laughs). Those words are from a line of Woody in the first Toy Story (as a sound in his voice-box) where he said “You’re my favorite deputy”. There is a restriction for the number of letters/characters, so we can’t put all of it.

——Well that’s an unexpected origin (laughs)! But, as you are looking at so much lines and texts, is there a complicated scenario that both you and Mr. Oka took care of?

Nomura: In term of management Oka occupies this position, and this time we requested Nojima (Issei) as a supervisor, from the last battle to the ending, and asked about the part we had troubles with. After that, there are four people who coordinate and perform proofreading, it can become complicated if there are missing bits at the end of the development. Still, this is quite a small group of people for a title of this magnitude.

——I see. Then, I am also wondering if there are scenarios and battles added by DLC and such after the release.

Nomura: The staff is currently on vacations, and I cannot say the details. I haven’t reached a decision, but for paid DLC I don’t think it would be divided content [T/N: published in separate DLCs, such as episodes], but we can provide something with high content all at once. Plus, apart from that, we are also considering publishing them for free. I would like to give priority to the next work rather than doing DLCs for a long time.

——”Next work”......That’s true! Now that we’re close to the release date [T/N: Note that this interview was conducted and published before the game's release in Japan], could you tell us about your feelings right now?

Nomura: I thought I would be relieved, but I haven’t been able to rest and relax (bitter smile). There was some trouble with ROMs being illegally obtained outside Japan.

——Is there anything you can say about that incident?

Nomura: We can’t really talk in depth about the circumstances of the incident because it’s already left our hands, but… We know for a fact that wrong information has been spreading, with people thinking that “there are many copies have flowed out and there are multiple leak origins,” but in actuality there were only 4 copies out there, and even though there was only one origin for all the other leaks, information has spread saying there are many. However, because of that one, it is terribly unfortunate that this made many fans waiting for “KHIII” sad. Because this incident happened, releasing worldwide simultaneously is a high risk [T/N: by 'worldwide simultanously' he means either on the same date or a few days apart, such as KH3’s near-simultaneous worldwide release with only a 4 days difference], so for my future titles, at least for packaged versions, I will need to rethink releasing them worldwide simultaneously.

——This was an unfortunate incident for fans, but I think everyone knows that it’s nonsense to rate the game with rumors [T/N: or 'reputation']. Now that the release date is closing by, all that’s left to do is to have fun.

Nomura: I wish for everyone to play it themselves and decide. We put “enjoyment” as the main goal when making “KHIII.” Every aspect and the staff’s effort is there for the enjoyment. I hope people will look at its every corner as this “KHIII” has many “enjoyments.”

See all the pictures published with this interview in the gallery below!

Follow our master coverage of Kingdom Hearts III here and on social media!