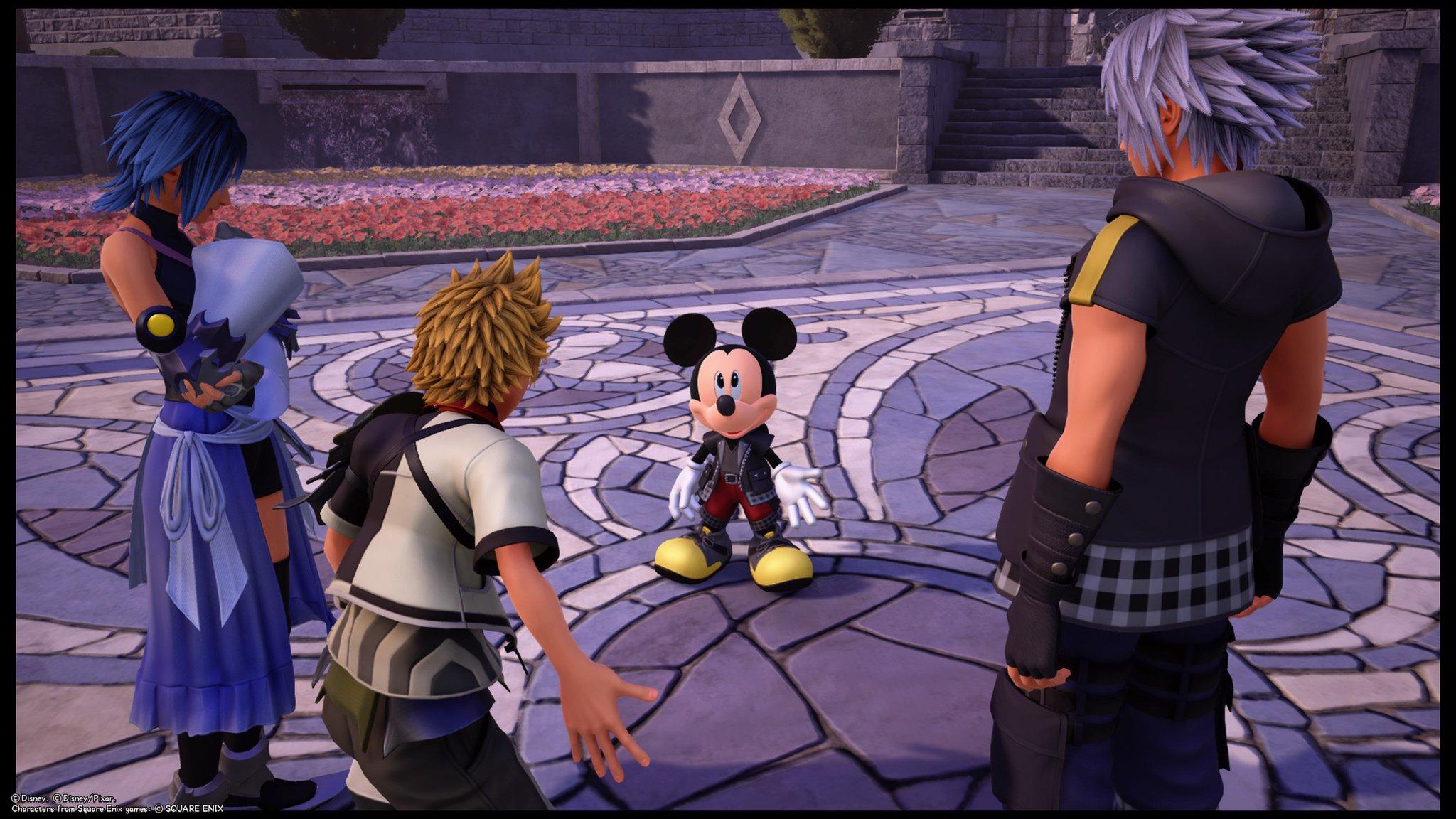 The translation for Mickey's Story "The Long, Long Journey" can be viewed below! This translation is courtesy of Cherrim.

I called your name there, in that place in the Realm of In Between.

Because I’ll always be by your side.

It was on the other side of the Door to Darkness. Aqua saved us and then I met Riku.

I met Aqua and the others much earlier than that—back then, I was still in training. I left Disney Castle to Minnie, Donald, and Goofy and trained under the great Yen Sid. But the moment I heard disaster had struck the worlds, I couldn’t just stand around doing nothing. I took a Star Shard, which would let me overcome the barriers between worlds, and took off. I landed in a craggy wasteland.

It was there I met Ventus, locked in a fight with Vanitas. Together, we made him retreat.

“Thanks for before, I owe ya. The name’s Ventus. What’s yours?”

“I’m Mickey.” I introduced myself with a smile and laughed as I explained the series of events that had led me there.

I showed him the Star Shard. “All I have to do is think it, and the Star Shard will take me anywhere I wanna go. Or… at least I thought it would. I haven’t quite got the fine points down, like… when, or where… It just kinda kicks in whenever it wants to. But I wouldn’t have met you if it hadn’t brought me here.”

Ventus peered down at the mysterious shard, but just then, it emitted an intense light and the two of us were sent flying.

The next place I ended up was Radiant Garden. This was when it was still under Ansem the Wise’s rule. It seemed I had gotten separated from Ventus in all that light, but there I met Aqua, who held her Keyblade at the ready to protect a small girl.

I quickly rushed over and took out the Unversed that was closing in on the pair. “Hurry! Ya gotta get that girl to someplace that's safe.”

Aqua scooped the girl up and carried her away. When she returned, the two of us fought together.

Afterwards, the little girl ran back to us. I had no idea why, but I could sense something special in her. That girl was Kairi, although I had never realized that.

Aqua kneeled down to be eye level with both of us. She looked at me and said, “Thank you. My name is Aqua. I train under Master Eraqus.”

“And I’m Mickey. I used to be Yen Sid’s apprentice. I came back to him for some more training.”

Aqua looked at Kairi. “I sense light within this girl. Do you think that’s why they attacked her?”

“Yep, I think ya might be absolutely right. If ya ask me, she must be somebody pretty extraordinary.” Aqua nodded. We shook hands, but suddenly a strong light flashed from my pocket. It was the Star Shard. “Oh, no! Not now! ...See ya real soon!”

After that, I fought Master Xehanort, but was thrown into the Lanes Between. It was Aqua who saved me. She took me back to Master Yen Sid’s, but at the time I was unconscious. When I awoke, I followed Aqua and the others to the Keyblade Graveyard. But the first thing I saw when I got there was Aqua, collapsed on the ground.

She opened her eyes before long, but by then, Ventus’s body was already under Vanitas’s control. After a fierce fight, Vanitas’s χ-blade ran wild and we were enveloped in swirls of light and darkness.

Still, I managed to find Aqua and Ventus and I brought them back to Yen Sid’s. Ventus never woke up.

“I’ll keep him safe until he wakes. Forever, if I have to,” Aqua said, but Yen Sid shook his head.

“I will tell you what your friend needs right now. It is not your protection. He needs you to believe. You see, Ventus’s heart hangs in the balance. It sleeps in the place between light and darkness. From all I can perceive, that means he will be looking for a friend—one who believes in him, to show him the way home. Just as long as you love him... then Ventus will be able to find you when he wakes. He can follow that love back to where he belongs—the realm of light.”

I wanted to give her words of encouragement, too.

“Don’t you worry, Aqua. I believe in Ven, too. Gosh, he’s been as good a friend to me as anybody. And if both you and me believe in him with all our hearts, then he'll have two lights to follow instead of one.”

Our friendship was the proof of the bonds we had formed. However, I hadn’t been able to find Terra. So, we could only watch as Aqua set off on another journey.

After that, I became a Keyblade Master and returned home to Disney Castle. Aqua’s whereabouts remained a mystery.

And then I became aware of the stars in the sky blinking out of existence.

I wrote a letter to Donald and set off once more. Before long, my journey brought me to the Realm of Darkness to seek out a Keyblade and there I met Aqua. Thanks to her help, Riku and I were able to close the door to Kingdom Hearts, the heart of all worlds.

After that, even though we were together, Riku and I got separated. However, our hearts were connected, so I was able to reach him when he arrived in the lower levels of Castle Oblivion, even if only my voice got through at first.

“Remember Riku, you’re not alone!” Riku was fighting Ansem, who had taken root him. “Listen close. The light'll never give up on you. You'll always find it, even in the deepest darkness!”

I desperately followed my connection to Riku. And just when he was about to be taken over by Ansem, that’s when I finally came running.

“Phew! Sure glad I made it in time! That oughta keep Ansem busy for a while! Sorry I couldn’t come here sooner, Riku.”

“Your Majesty, is it you?” Riku was astonished to see me.

“This time you’re not an illusion. I’m so glad that you could make it here.” Riku let me go and he seemed so relieved. We sat for a while.

“I made a promise to you that I would find a way, didn’t I? ...But don’t worry, we can defeat Ansem together!”

But Riku only shook his head. “Sorry… I’ve gotta face him alone.”

Riku had made his choice and I reluctantly nodded. Defeating Ansem would be meaningless if Riku didn’t do it himself, of course. I understood, but I still felt I had to help him, even if only a little.

Once Riku was done fighting alone, I told him, “The road you chose—I didn't know. Light and dark, back to back. With you, I think they might meet in a way nobody's seen before. Wonder where that road leads. I'd like to see myself. I’d like to walk the road with ya.”

Riku gave a shy laugh. “Your Majesty, I'm really flattered... I don't know what to say.”

“Gosh, Riku, you know you don't have to call me that now. We're pals.”

And our journey began.

This was not the twilit road to nightfall, but the road to dawn—and the two of us were walking it together.