More details to be announced this summer.

More details to be announced this summer.

"The idea of a KINGDOM HEARTS concert has been in the works for several years, but even so, I was astonished to learn that our music would be performed by a full orchestra, in other countries no less. I’ve been given the opportunity to oversee the creation of the title, logo, and many other aspects of this amazing production, and as the director of the series, I am confident that what we’ve created will touch the hearts of our beloved fans everywhere.

The World Tour is slated for 2017, the same year as the KINGDOM HEARTS 15th anniversary. In the meantime, fans will get a chance to explore the world of KINGDOM HEARTS II.8, which is coming out later this year. I hope the excitement and joy they get from the experience will only increase their anticipation for the release of KINGDOM HEARTS III."

I heard this quite often, and it echoed my own feelings. I’ve wanted to have a concert for some time, and I’m happy to announce that it’s finally become a reality. When I began composing for the KINGDOM HEARTS series, I couldn’t even dream this day would come. But it has, thanks to our beloved fans. This concert and the music of KINGDOM HEARTS could not have existed without their undying support. I can’t thank them enough. The concert will encompass my feelings toward the series and those dear to me around the world. I look forward to seeing everyone there!

Thanks goes to wildfaery for providing the translations.

UPDATE 1: Ticket information for the Kingdom Hearts Orchestra -World Tour- have been announced. There will only be 150 VIP tickets per concert, and a VIP ticket will cost roughly $189. The VIP ticket also includes a meet and greet with the composer of the Kingdom Hearts series, Yoko Shimomura. Below you can view all of the ticket prices, as they vary from country to country. You can view the sales pages for the venues with ticket prices listed by clicking on the respective links below as well:

UPDATE 2: Wild Faery has sent an email out stating that the physical tickets ordered through their website will not be shipped until mid-June for the shows in Paris, New York, Singapore, and London. The email also goes into detail about how to request sitting together with other groups and how to contact them about any issues regarding the tickets.

The email reads as follows:

First of all, many thanks for your interest in our concerts ! We would like to inform you that delivery for all tickets purchased on our official shop for KINGDOM HEARTS Orchestra - World Tour - have been delayed to mid-june instead of late may (for Paris, New York, Singapore and London). So you will be receiving your physical tickets between mid-june and end of june 2016. Rest assured that your order is secured and that your seat number won't be affected by this delay.

By ordering on our shop, you have secured a seat in your selected category that was better located that any seat available at any other retailer at the time of your order. We also would like to inform / remind you that : - It is not possible to select seats when ordering on our shop, and that seats are assigned when shipped, on a first-ordered, first-assigned basis on your purchased category.

- All tickets within the same order will be seated next to each other. If you wish to seat next to another person or group, please send both order reference to info@wildfaery.com (just note that your order will then be processed as the latest of the two order for seat assignation).

- If you wish to change your delivery adress before we ship the tickets, you can send an e-mail to info@wildfaery.com, with your order reference and the updated adress within the e-mail.

- You will receive an e-mail when your tickets will be shipped. In case of any delivery problem, we will investigate (in 99% of the cases, tickets will return to us and we will contact you), and you will anyway get your seat on the concert day in a way or another shall there be another issue.

We apologize for any inconvenience caused, and we wish you an amazing concert next year!

With all our best regards,

UPDATE 3: Tickets for the Japanese exclusive event Kingdom Hearts Concert -First Breath- have been shipped and feature art of Sora in his Kingdom Hearts II costume that was previously included in the collector's edition of Kingdom Hearts HD 2.5 ReMIX. A picture of what the ticket looks like can be found below thanks to Twitter user ‏@aibo_ac7. 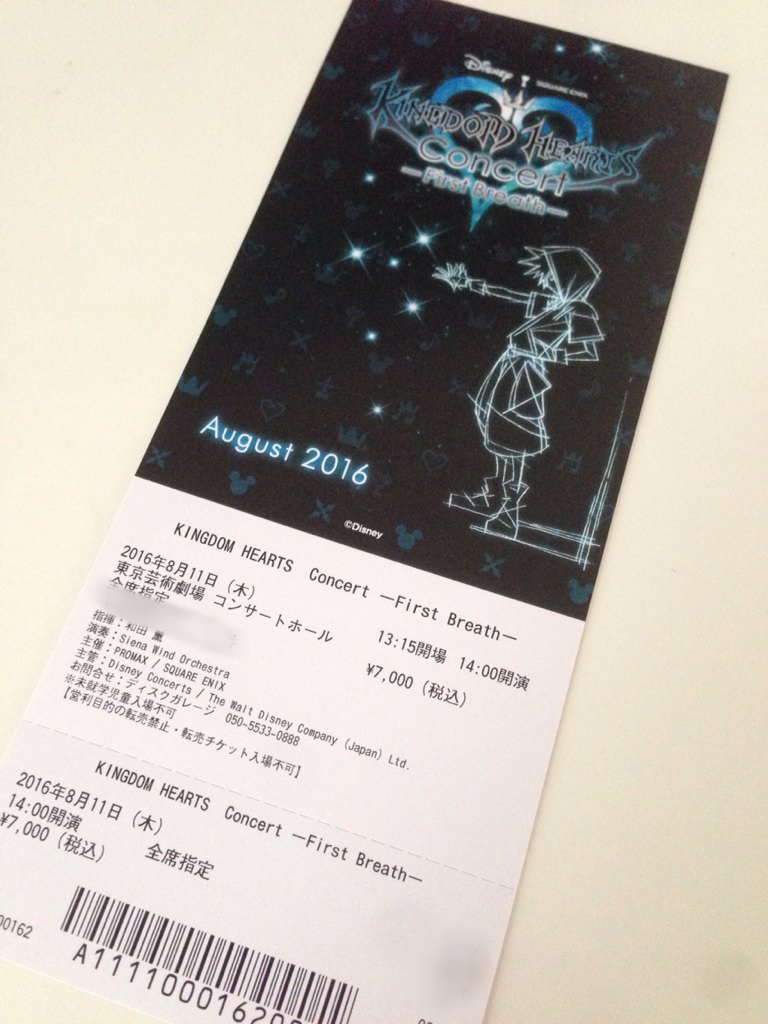 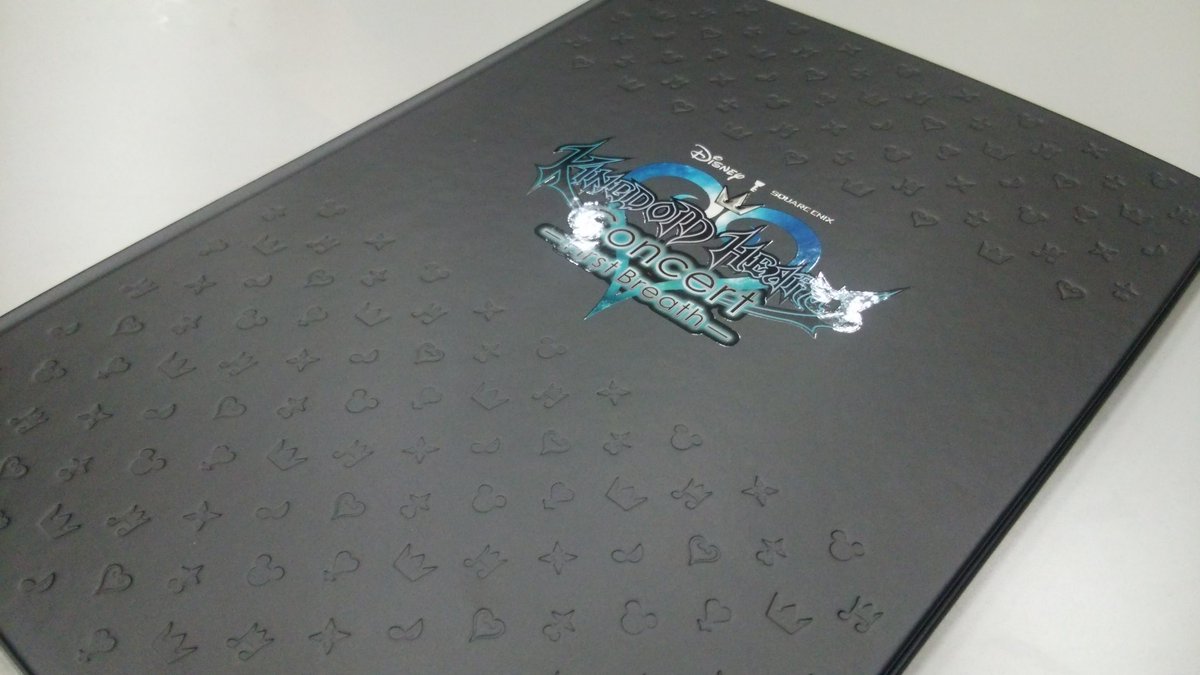 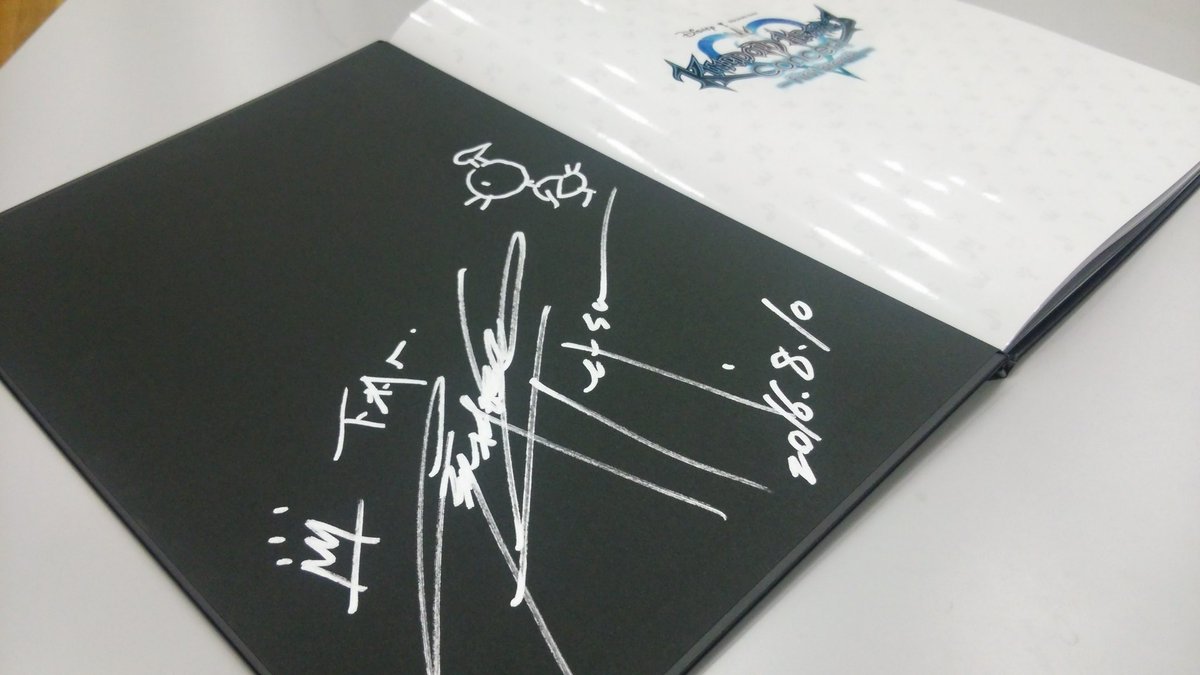 UPDATE 5: The Japanese site for the Kingdom Hearts Orchestra -World Tour- has updated with new promotional art. You can view this image below: 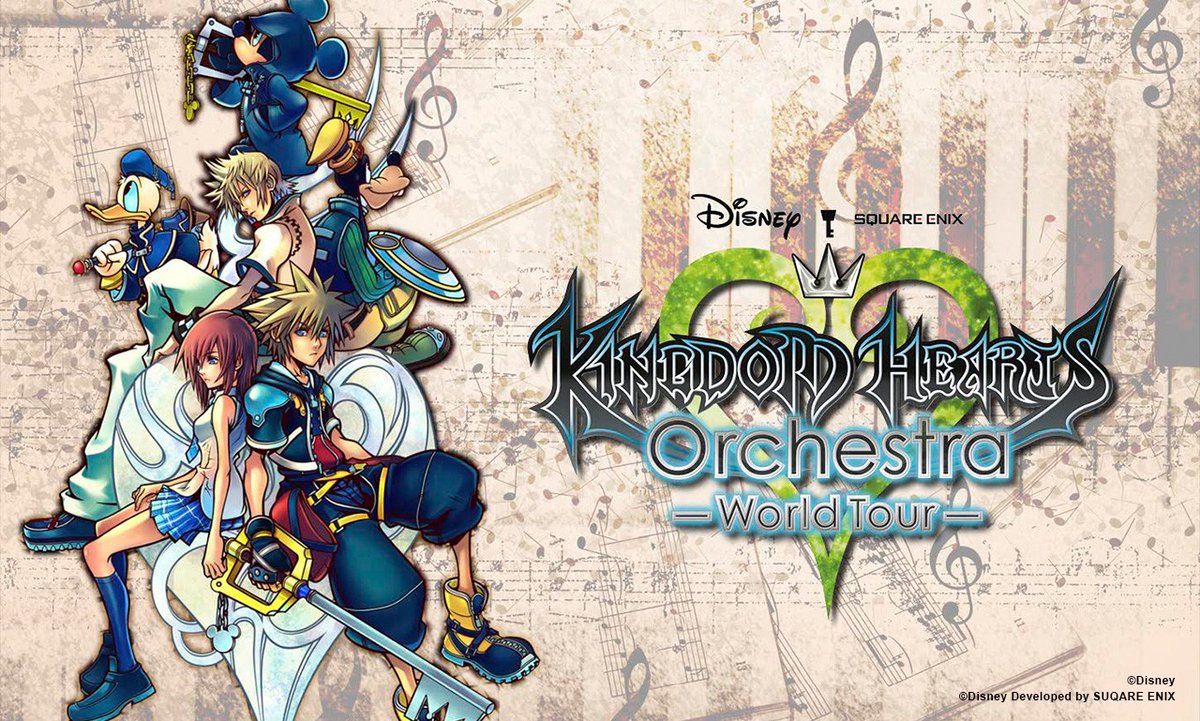 UPDATE 6: Four additional performances have been announced for the Kingdom Hearts Orchestra -World Tour- in Kuala Lumpur, New York, Los Angeles, and Osaka. The announcement is as follows:

We are thrilled to confirm more performances of the first ever official KINGDOM HEARTS orchestral concert!

One week after the show in Singapore on March 6th & 7th, 2017, Kuala Lumpur’s Plenery Hall at the Convention Center will welcome KINGDOM HEARTS on May 13th, 2017 (tickets available at www.ticketpro.com.my from November 25th, 2016 at 6p.m. local time).

In New York, where the June 24th concert is already sold-out, another performance will take place at the United Palace Theatre the day before, on June 23rd, 2017 at 8 p.m. Pre-sales at http://shop.wildfaery.com starting on November 25th at 6p.m. local time. Tickets will also be available starting on December 8th at Ticketfly (http://www.ticketfly.com).

One more show is also added on June 11th at the Dolby Theatre in Los Angeles. Ticket on-sale from November 25th at 6p.m. local time at Ticketmaster (www.ticketmaster.com).

Finally, on July 8th, 2017, the show will head to Osaka’s Orix Hall for its Kansai Premiere (details to be announced later)!

Don’t miss out the first ever official orchestral concert of the beloved role-playing video game saga, with giant-screen, HD game projection to celebrate the upcoming 15th anniversary of the license! Remember Sora, Riku, and Kairi’s adventures among the characters and worlds from Disney and FINAL FANTASY in an

UPDATE 7: Japan's tickets for the Kingdom Hearts Orchestra -World Tour- have been released. They look very similar to the previously shown Kingdom Hearts Concert -First Breath- tickets, except with a green color scheme instead of a blue one and with art of Sora as a conductor instead of art of a hooded Sora.

View the ticket below: 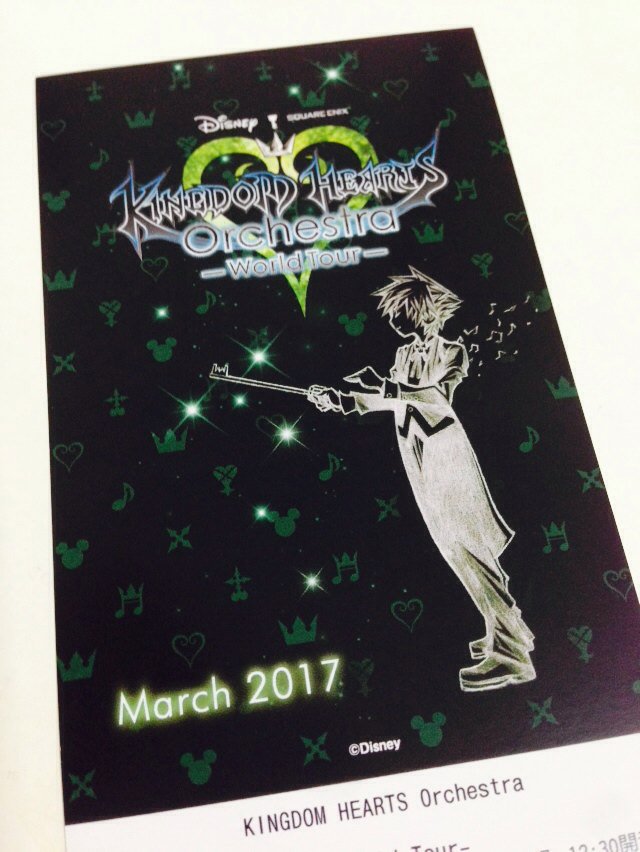