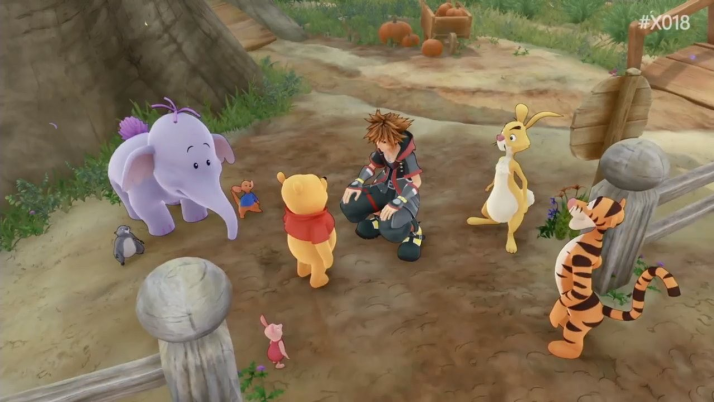 A new world for Kingdom Hearts III has been revealed at X018! Hundred Acre Wood will be returning as a minigame world once more!

The new X018 trailer showcases cutscenes and gameplay from this new world. You can watch it below!

UPDATE [November 10, 2018]:  Following the release of the Kingdom Hearts III: Winnie The Pooh trailer at X018, Jeff Rubenstein had a brief interview with Shinji Hashimoto on stage at X018. You can read its transcription below, as well as watch the video from the live show here.

Hashimoto: Well, first of all, thank you very much for coming today to hear me talk! So I’m going to explain a little bit, just a little bit! So, the Winnie The Pooh world has been in the series as well until now, but in Kingdom Hearts III, in The Hundred Acre Wood, you can enjoy playing the mini games as they were in the previous titles, and you can also enjoy interacting with Winnie The Pooh and his friends. Now in Kingdom Hearts III there are many mini games, such as the one based off of Ratatouille, the cooking mini game, and also LCD mini games called the Classic Kingdom. We also figured we didn’t have any puzzle games in Kingdom Hearts III yet. So, for the Hundred Acre Wood world we decided to have puzzle like mini games in there. So you’ll be able to enjoy cute puzzle games.

Rubenstein: So what are some of the key advances in gameplay that fans can expect in Kingdom Hearts III?

Hashimoto: In Kingdom Hearts III, we do use the hardware many ways in the different worlds. For example, in the Caribbean Sea from the Pirates of the Caribbean, we used a hardware to depict the roaring seas that you haven’t seen in the trailers and on the details of the characters. For the CG world, San Fransokyo in Big Hero 6, we utilized the hardware of the vast city and the high buildings that you can jump off from. So, all the verticality in that world utilizes that new hardware.

Rubenstein: That’s awesome to hear because this is the first Kingdom Hearts of this generation and the first one on Xbox. I can’t wait to see what it looks like on Xbox One X. Now, because Kingdom Hearts is new to Xbox, I thought it would be interesting for all of us here to share how Square Enix and Disney first came together to collaborate on the original title. I heard an elevator was involved?

Hashimoto: So, we do get this question quite a bit, but it was about 20 years ago we were in the same office building. Square was in the same office building as Disney in the city called Meguro. A lot of people think it was the president of Disney, but it was actually the producer at Disney that reached out to us in the elevator. Of course, it really wasn’t a conversation that we could hold in the elevator, so we took a couple of days after that, to really sit down and talk about the details and that’s how Kingdom Hearts came about.