D23 Expo Japan is an event taking place from October 12-14, 2013. Here, the Kingdom Hearts series will be featured, with Kingdom Hearts III confirmed to appear, and likely to be receiving new footage. Our coverage of D23 Expo Japan has begun. Keep checking back for more info.

Gamer have posted an article about the Kingdom Hearts Limited Stage, and with the article, shared many phots of the event. These can all be seen below.

The Kingdom Hearts Limited Stage has begun! We will provide live updates here, so keep checking back. The event goes for 1 hour in total, so stay tuned. All times below are in JST. (With thanks to @aibo_ac7, @sqexgal & @shinkansen3000)

15:00 - The event has begun! 3D Keyblade holograms are being shown, with the Keyblades rotating. The χ-blade is one Keyblade shown. Mickey Mouse is on the screen, with a trailer introducing the past Kingdom Hearts games showing.

15:14 - The Kingdom Hearts series has shipped over 20 million units worldwide!

15:16 - They are showing early artwork of Sora on the screen. Originally, Sora's pants were orange.

15:18 - They are showing a new trailer about the early stages of the Kingdom Hearts series!

15:24 - Hashimoto is going over the history of KH. Kingdom Hearts III is announced, and χ[chi] is now being discussed. New world(s) and scenarios are coming to Kingdom Hearts χ[chi].

Most Kingdom Hearts announcements at the event will occur within the "Kingdom Hearts Limited Stage", an event on October 14 at 3PM JST. A countdown to this event is above. Here, Kingdom Hearts III information and footage is likely to appear. Nomura has also mentioned his wishes to make another announcement on the stage (quote below | full interview here). Could this be Kingdom Hearts HD 2.5 ReMIX? We'll find out soon.

Nomura : Regarding D23 Expo Japan, this is the first time that Disney holds such an event outside the U.S., so it is a great honor for us to be invited. I’m very happy that we have the opportunity to hold a special conference for Kingdom Hearts. I really want to make a surprise announcement for this event but it is currently under discussion, so we’ll see (laughs). Since we announced Kingdom Hearts III at E3, we cannot make another announcement for the same game. Instead we will announce something else, which you will see soon enough.

Update 1: An exclusive drawing of Sora, signed by Tetsuya Nomura, is being auctioned off at the event. @luce10wa & @hinako1014 have uploaded a photo of this, and it can be seen below. 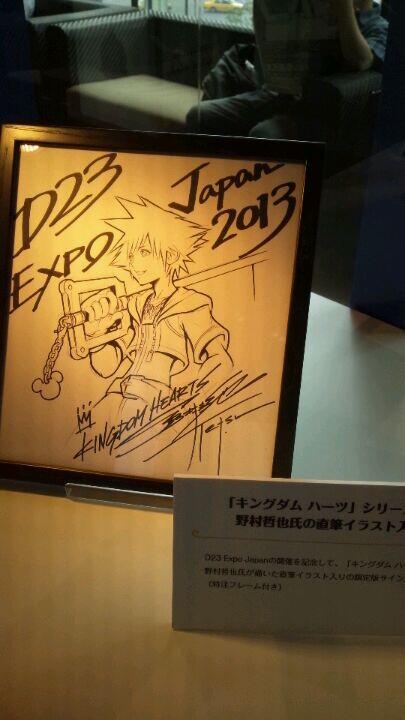