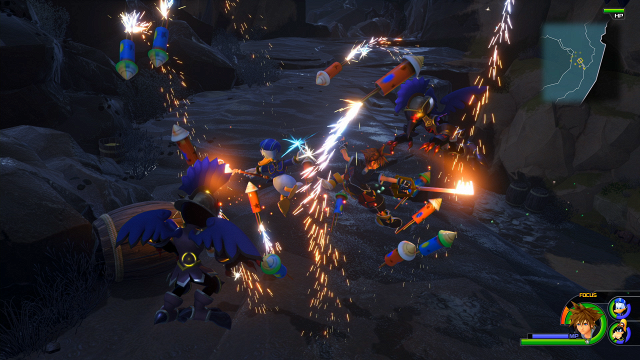 Nomura talks about his favorite character and world, dark themes in Kingdom Hearts III, and the possibility of a Mary Poppins world

IGN Brasil has just published an interview conducted with Kingdom Hearts series director Tetsuya Nomura back during E3 2018, in which he talked about his favorite character, the dark themes in Kingdom Hearts III, and, surprisingly, Mary Poppins.

Nomura stated that his favorite character from the series is Ansem (Xehanort's Heartless), and that he does not relate to Sora.

"When I wrote the story, I realized that I'm more of Ansem / Xehanort's side, because they say things I would probably say. On the other hand, Sora says things I would not personally say."

Nomura commented that he prefers JRPG games to not show explicit violence.

"We do not have a boundary line set on dark themes [in KH3], as long as it's not on the screen and the game does not have very violent scenes."

However, he still promised that Kingdom Hearts III will have some "shocking scenes."

Regarding choosing the worlds that will appear in the game, he said:

"For each game and each world, I ask my team to bring ideas and create concepts. These documents include which worlds they would like to see in the game and what kind of gameplay we could develop in these worlds.

"I take a look at all this and see which world or which gameplay is interesting enough for me, then I make a list of these and other worlds that should be in the game in order of priority."

He states that there will be "some original world in Kingdom Hearts III."

Nomura even mentioned the idea of a Mary Poppins world.

"Mary Poppins has always been in our conversations about concepts and ideas, but we've always wondered how we can use that film in the franchise. There's a possibility, as long as there's a good idea for that."

The interviewer also asked Nomura if he was aware of how popular Kingdom Hearts is in Brasil, to which he replied that he was surprised in discovering a Brasilian fanbase.

"We are developing this game in Japan, so when I come to events like this [E3] and I meet people from the press from different countries and regions, that's when I realize how big the franchise is, because it's not something I feel in practice. That all of this is real, but I do not realize it on a daily basis."

What "shocking" surprises could be awaiting in Kingdom Hearts III? Would you like one of them to be a Mary Poppins world? Let us know in the comments!