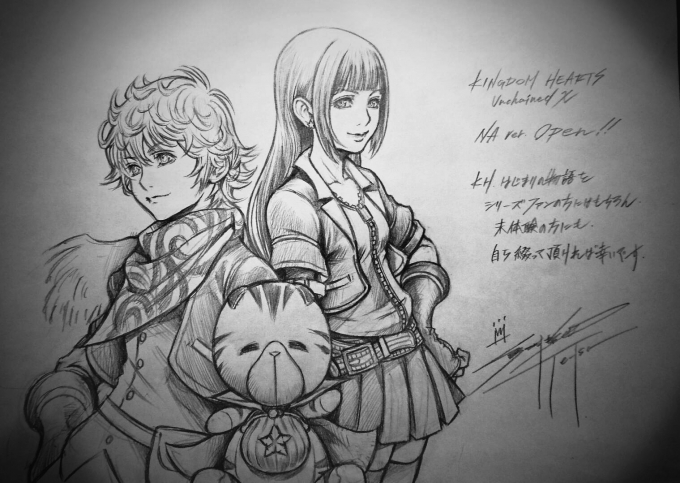 Square Enix has announced that Kingdom Hearts Unchained χ is coming to North America on April 7th, 2016. The game will be released on iOS and Android. In addition, a new Twitter account was made for the North American version of the game where they will release updates and news. You can follow this Twitter account here. The blog also includes a commemorative drawing from series director Tetsuya Nomura, as well as an interview about the game's ties to the series, both of which you can view below: 1) Please explain where in the KH series the story takes place.

This is the story of the “beginning” of the KINGDOM HEARTS series; in other words, it falls into the earliest part of the narrative. It takes place in the world of fairy tales talked about throughout the series, during an era before the Keyblade War. There are many different keyblade wielders in the world, and you, the player, are one of them.

3) You mentioned this before at E3 2015, but what was the inspiration behind the character Chirithy?

When we realized we needed some kind of character that navigates the players due to the nature of the game, I didn’t want a character that’s too self-asserting considering that they would accompany the players throughout the journey. Once that idea got rolling, then I thought a cat would be great, since you can’t tell what it’s thinking, but can still get along fairly easily with humans, so I went with my favorite, the Scottish Fold as my motif.

I liked the Meow Wow from KINGDOM HEARTS 3D: Dream Drop Distance, too, but I designed the eyes the way I did to make sure you do not get a sense of it being self-asserting. Some people might have the wrong perception that because I own Scottish Fold cats, I modelled the character after them, but it’s actually the other way around; a while after we began developing, I started to own two Scottish Folds. By the way, their names are not Chirithy.

The game is currently progressing under a certain rule, so the only brand-new world would be “Daybreak Town,” the home town in which the players first start out, but there may be a possibility [of other worlds] should we continue providing service through the app.

In terms of new characters, there are not only the five Foretellers and Chirithy, but there are also key new characters named Ephemera and Skuld that appear and move the story.

5) What aspect of the game do you think will appeal to fans? What do you think fans will get hooked on? (i.e. collecting medals, events, etc.)

One of the biggest pillars would be the sense of playing live, which is very different for existing KINGDOM HEARTS series titles thus far. You may have communication and cooperation, as well as the occasional competition, but the sensation of going somewhere and realizing there are people there and the world is moving is very unique to this particular KINGDOM HEARTS.

Along those lines, various events are being held frequently depending on the occasion, the medal collection element is key to your battles, we also offer a ranking element, and a unique story told only in this KINGDOM HEARTS, so I’m sure there is some kind of element that would pique your interest.

6) What kind of costumes are included in the game? Is there a particular costume of a character that you particularly love?

There are so many different costumes already; of course you have the original designs, then Disney characters, KINGDOM HEARTS characters, and seasonal/special occasion designs, all for both male and female avatars respectively. Plus, you can mix and match the outfit elements, so I think the players can really bring out their individuality.

From what I’ve seen, the hairstyle of the KINGDOM HEARTS 3D: Dream Drop Distance version of “The World Ends with You” Neku matched up with the black coat of Organization XIII seem to be popular. Also, the KINGDOM HEARTS version of FINAL FANTASY VII Cloud costume and King Mickey’s costume are popular as well. If I were to choose, personally, I’d like the Cheshire Cat costume.

7) Do you have a special message for the fans?

As mentioned in the beginning, this is the story of the start of KINGDOM HEARTS. In other words, there is no need for any prior knowledge of the series.

I would love for people who have not yet played KINGDOM HEARTS to take this opportunity to casually jump right in with a blank slate. And of course for our fans, you can approach and play this KINGDOM HEARTS in any way you like, so through collecting medals of your favorite characters, collecting costumes, and moreover becoming a part of the KINGDOM HEARTS world and experiencing the enjoyment of weaving your own story that leads to one of the biggest mysteries in the series, which is the “Keyblade War,” I hope you can further enjoy the upcoming release of KINGDOM HEARTS Ⅱ.8 and KINGDOM HEARTS Ⅲ, as well as the KINGDOM HEARTS that will continue beyond that.

Thus far there has been no mention of when Kingdom Hearts Unchained χ will release in other regions. We will provide updates as soon as they become available.

Will you be downloading Kingdom Hearts Unchained χ? Let us know in the comments!