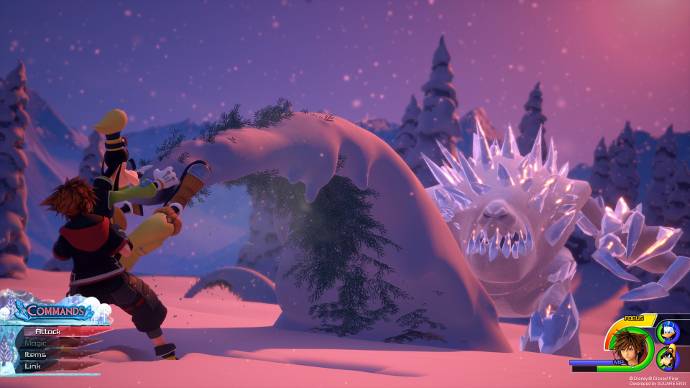 Following a hands-on experience of an hour-long demo of Kingdom Hearts III, Geek.com has published an insightful review of playing the third main installation of the series from the perspective of a newcomer. In it, Tony Polanco describes his positive experience of playing through the Olympus and Toy Story demo.

While talking about the various gameplay elements, he adds in comments made by a Square Enix PR representative on what to expect from the final version of the game. He states:

A Square-Enix PR representative explained that Sora is more agile than in past installments. For example, he can now wall run up shimmering vertical surfaces. He also has some context-sensitive motions.

Players can now equip up to three different keyblades at once. They can also level up each keyblade to make them stronger. Before, there was no incentive to continue using keyblades obtained from previous worlds since the newer keyblades were more powerful. Now, keyblades you have a fondness for are viable even later in the game since you can level them up.

In addition to the main story, players can look forward to several mini-games. One is a cooking game with Remy from Ratatouille. You must find ingredients hidden across several of the worlds and use them to create new recipes. There are 20 different old-school Tiger Toys/Game & Watch style 2D side scrolling games based on Mickey cartoons from the 1930s and 40s. Building your Gummi ship (used for traveling to each world) is pretty much a mini-game of its own. Kingdom Hearts 3 is around 40-50 hours if you stay on the critical path. Including the mini-games, players can expect 80+ hours of content.

It seems that players can advance through the game's main story in approximately 40-50 hours, or about double that time considering additional playable content.

Click here to read the full review on Geek.com!

Many thanks to Tony Polanco for talking to us about his experience and confirming that these statements were made by a Square Enix PR representative.

UPDATE: Geek.com has updated the following statement to clarify that the game lengths given to them by the Square Enix PR representative were approximate, but the exact length has not yet been finalized as the development of the game continues towards its release date.

I was told Kingdom Hearts 3 is around 40-50 hours if one stays on the critical path. Including the mini-games, players can possibly expect 80+ hours of content. With that said, Square-Enix has yet to finalize the game’s exact length as there are still many months to go before release date.

How will you be playing Kingdom Hearts III when it comes out? Will you be speeding through the main story or enjoying it in full on your first playthrough? Let us know in the comments!