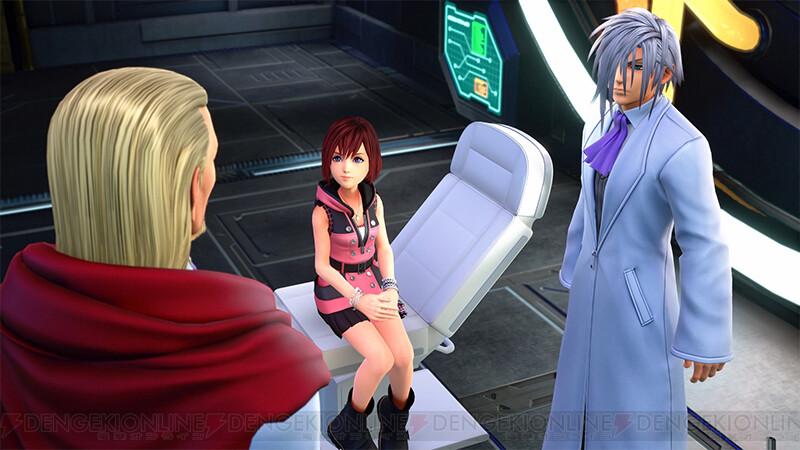 Dengeki recently conducted an interview with Tetsuya Nomura on Kingdom Hearts Melody of Memory and what to expect from the series in the near future. You can read the interview below, courtesy of translations from our team's Ryuji.

—The Objective in Creating Melody of Memory: A KH-esque Rhythm Game—

Interviewer: Both the game and the official soundtrack came out within the same time frame. Please tell us what kind of request you made to Indieszero (known for developing the Theatrhythm series) when developing Memory of Melody.

Nomura: Their proposal, in a few words, can be described as "Theatrhythm: KINGDOM HEARTS edition". However, I didn't want it to make it a carbon copy of Theatrhythm Final Fantasy, and slap the Kingdom Hearts moniker on top of it.

Interviewer: So you wanted it to be similar, yet completely different to Theatrhythm?

Nomura: Correct. I asked Indieszero to combine the action of Kingdom Hearts with the rhythm genre. As you can imagine, it took a lot of trial-and-error, and lots of testing, because it is complicated to put those two pieces together nicely. We also wanted to make the game not look too flashy, so that people wouldn't feel sick when playing the game.

Interviewer: I see. There are Keyblade strikes and magic, so you can really feel you're actually playing KH.

Nomura: It makes me glad that you're saying that. After all, that was the main objective of this project.

Interviewer: Kairi will play a specially important role as this game's "storyteller". Could you elaborate more on that?

Nomura: In the game's story, Kairi will recap the entire story of the Kingdom Hearts series so far, in a way that even newer players can easily digest. However, it is impossible to get into the most intricate details, so if you're curious about a certain part of the story, I strongly recommend you play that game and enjoy the story for yourself in its fullest.

Interviewer: The game contains a total of 140 songs. Were any songs personally suggested by you, Nomura-san?

Nomura: None in particular. I guess my initial request was to include as many songs as possible, as I did not want to implement more in a DLC package.

—Looking Ahead Into The Future of the KH Series—

Interviewer: Next, let's talk about a future outlook for the series. With KHIII, a saga [The Seekers of Darkness' saga] ended. But there's still a lot of mystery surrounding the characters, correct?

Nomura: Of course. In the near future, I plan to change the story drastically, as in, change the structure on how it's told in a way that it can grab all the pending mysteries. The objective here is to try out a brand new story while still integrating the plots and mysteries that are currently pending.

Interviewer: In KH UX Dark Road, you delve into the past of Xehanort. So does this mean we'll see more of him in future series?

Nomura: To be fair, Dark Road wasn't a project that took future titles into consideration. It was more of a project the KHUX team was thinking of doing that's been in the backburner for a bit. Xehanort's saga ends with KH III but you can clearly see in Melody of Memory's story that his influence does shift the atmosphere, even if just a bit. However, I don't think Xehanort will become a main antagonist/main boss in future titles.

Interviewer: One of the main perks of Kingdom Hearts is how it always sets the atmosphere for a continuation. Is that something you commonly think of when developing the game? Example: When developing Kingdom Hearts I, did you anticipate the existence of Sora's nobody—Roxas?

Nomura: Whenever I think of a story, I try to make it as extensive as possible. For example, when developing Kingdom Hearts I, I was thinking of its sequel, Kingdom Hearts: Chain of Memories. However, not everything I thought came to fruition. One such case is KH Dark Road, where I haven't really thought much about it.

Interviewer: The Kingdom Hearts series started on the PlayStation 2 system. However, there were no new releases to the PS3 or the PSVITA (instead, what happened is that remasters of KH1 and 2, dubbed KH1.5 and KH2.5 were released). Why wasn't there such a jump to new hardware?

Nomura: I had some foggy ideas to release new titles on the PS3 and the PSVITA. Especially since…the PSVITA, for a portable console, packed quite the beefy hardware, and could stand up to the task. However, those plans never fully materialized, mostly because at the time, I was involved in FF Versus XIII's development.

Interviewer: Is the new KH game going to take advantage of the powerful technologies boasted by the new PlayStation 5 and XBOX Series X/S?

Nomura: We can't say we have plans to do so as of now, but if Kingdom Hearts were to come to these new generation consoles, it would most certainly be a latecomer [basically, the game isn't likely to come out in the 1st year of the consoles' release]

Interviewer: One of the most talked about topics in Kingdom Hearts is its music. Particularly, the songs composed by Yoko Shimomura. Why did you decide that she would be perfect for the job?

Nomura: I got a recommendation from the music department at Square. At the time, I had worked with her on Parasite Eve [PlayStation 1 game released in 1998 by Squaresoft. It was an unique kind of RPG, known as a cinematic RPG.], so it was fairly easy to approach her, since we were already acquainted by then.

Interviewer: Her songs are popular both in Japan and overseas.

Nomura: To be fair, I was pretty surprised. When the overseas fans called her "Goddess" and how they called me "Papa", I was honestly quite surprised such nicknames existed for us.

Interviewer: What was your first request to Shimomura-san?

Nomura: It was when I wanted to make a battle arrangement for all world songs. As you know, each KH world has a field song and a battle song. I wanted it to feel like you were in a theme park.

Interviewer: What do you think of her songs, from your point of view?

Nomura: Hmm…they sound they carry a lot of emotions…? They sound like drama…? [TL NOTE: The tenses in the original Japanese show that he's completely unsure.]

Interviewer: Aside from Shimomura-san, we also have other well-established composers for the KH series, such as Takeharu Ishimoto and Tsuyoshi Sekito.

Nomura: I believe it was during KH: Birth of Sleep's development process that we asked them to compose. Ishimoto is involved with the Dissidia series, as well as The World Ends with You. He's great in creating cool-looking songs. As for Sekito…his forte is creating bright and cheerful songs. He also has a close relation to the development team in Osaka, so it's very easy to request bright and cheery songs for things such as the UI [example: World Map] or mini-games.

Interviewer: Finally, please give a comment to everyone to wrap up the interview.

Nomura: We are proud that we managed to release Kingdom Hearts Melody of Memory and the KHIII soundtrack. Both me and the team hope that all players enjoy it fully. After the release of MoM, the series will probably take a little break (no announcements and/or new things) until 2022. 2022 marks the 20th anniversary of KH, so I plan to share some great news by then.

What are your thoughts on this interview? Let us know in the comments below!