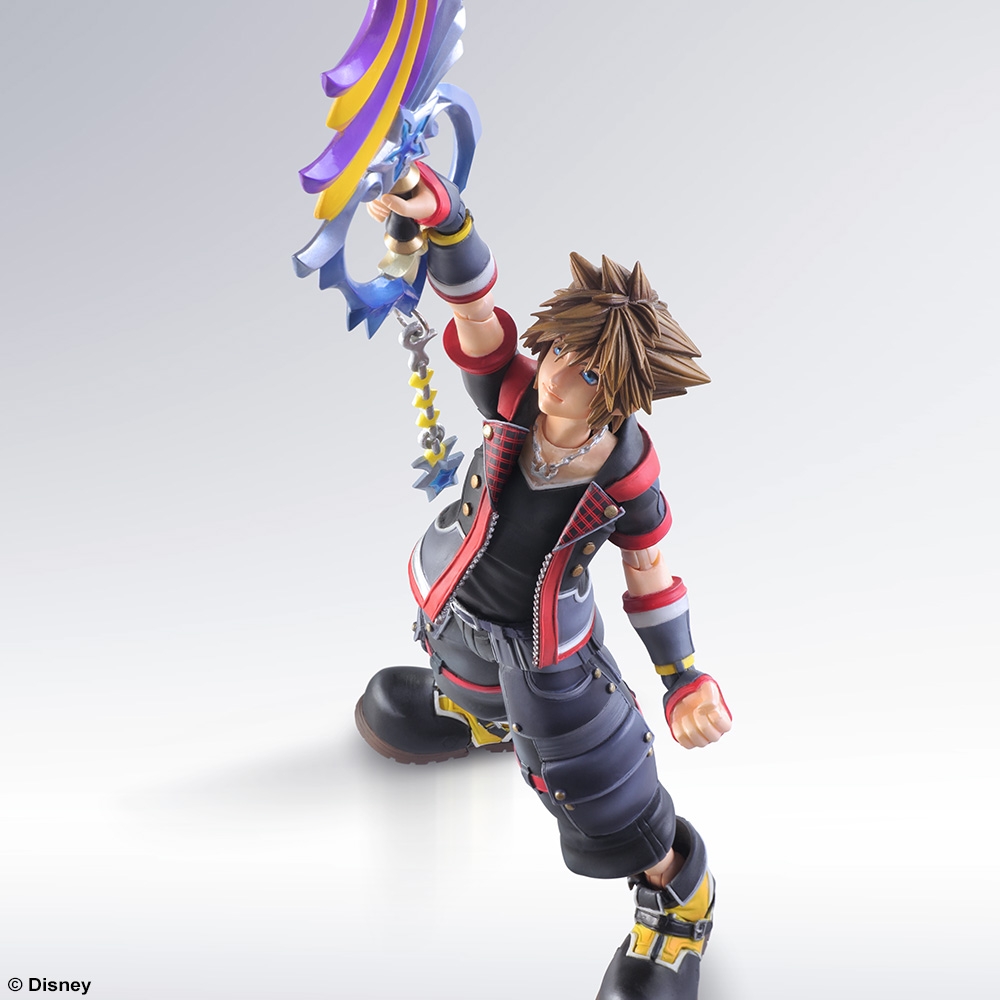 A new Play Arts Kai figure of Kingdom Hearts III Sora, to be released on January 30, 2017, is now available for pre-order at the North American branch of the Square Enix Store for $149.99! The figure displays Sora in his Kingdom Hearts III outfit wielding an unnamed Keyblade that was previously featured in the trailer released during E3 2015. Pictures are shown below.

A description of the figure follows:

Accompanying the improvements in the graphic technology of the game, our designers have paid close attention to expressing the minute details in the sculptwork of Sora in his slightly more mature and grown-up figure.

The costume design is based on the look of Sora’s KINGDOM HEARTS II outfit, with the predominantly red and black color scheme of KINGDOM HEARTS 3D: DREAM DROP DISTANCE.

He is highly poseable due to the utilization of flexible materials. The Keyblade that can change form into a double crossbow – which could be called the trademark of this title — is also included as an accessory part. With all these features and more, this figure is certainly an eagerly awaited collector’s item for fans.

What Play Arts Kai figures do you own? Will you be adding this Kingdom Hearts III Sora to your collection? Let us know in the comments!

UPDATE: The official Square Enix Japan online store has been updated with the Kingdom Hearts III Sora Play Arts Kai. It is listed on the store as 15,240 yen with tax included, which converts to approximately $142 USD. The release date for the figure is November 6, 2016 , which is about 2 months earlier than the North American release.

UPDATE 2: An English foretext is provided within the packaging of the Kingdom Hearts III Sora Play Arts Kai figure. It reads as follows:

With the world under the control of a single Master, the final struggle for true peace begins.

Through countless adventures across many worlds in his long battle against the darkness, Sora, once a little boy who only dreamed worlds beyond his island even existed, has grown up to be a dashing young man. Now he is realizing that that battle has played out exactly as Master Xehanort had planned, and the second Keyblade War, the final struggle between light and dar, looms ahead. To counter the overwhelming darkness, Sora and his friends must gather the seven guardians of light. His best friend Riku and King Mickey seek out a battle-scarred Keyblade wielder, while Sora, Donald, and Goofy set off on a journey to find "the Key to Return Hearts." Never-before-featured Disney worlds set the stage for another daring adventure to save the universe!

Chosen by the Keyblade, he is the one whose heart's light never fails to shine as a beacon of hope.

Sora, the brave hero chosen by the Keyblade, has always had a strong sense of justice. Through his many battles against darkness, he has grown and learned about the world immensely. Drawn to his light, many friends have lent him their support and granted him their powers to counter the darkness: Riku, the childhood friend he grew up with on Destiny Islands; Donald and Goofy, the two comrades with whom he has shared his adventures from the very beginning; and King Mickey, who unfailingly supports Sora with his own mighty strength. As the world becomes enveloped in another battle against darkness, the Keyblade wielder and his friends must rise up against Master Xehanort and thwart his plot to incite another Keyblade War.

The text has been procured by @ArikaMiz.