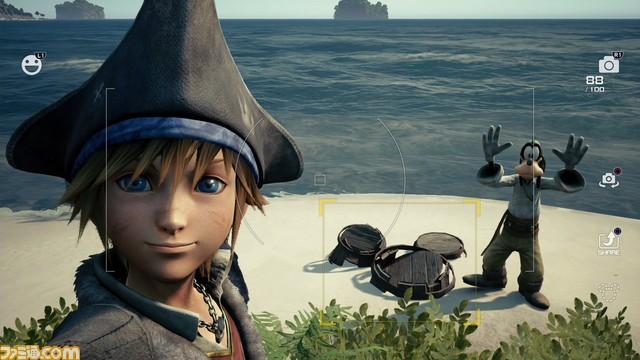 Kingdom Hearts III director Tetsuya Nomura took part in an exclusive interview with Famitsu, just before the release of the game! This interview is quite lengthy, so we're separating it into multiple articles to make it easier to digest.

In the first segment, the game's story was discussed, as well as the game's secret ending requirements, which we've separated into a spoiler tag. Some new screenshots also accompanied this publication. You can read a translation of the interview below.

Kingdom Hearts III will be released on January 25, 2019. Tetsuya Nomura, director of the game who is preparing its release, took time to let us interview him.

——I was able to play ahead, all the gameplay elements are packed! After clearing a world, you can continue to explore and play mini-games. Even story-wise, there is a feeling that the missing pieces of the puzzle will fill in, and that the fans won’t be able to bear it.

Nomura: Thank you very much. KH III is, so to speak, “the story of defeating Master Xehanort”. With that, the Dark Seeker saga is complete and leads to a big break for the series, as many mysteries are solved.

——Can you can explain Sora’s goal a bit this time, for those who will play for the first time? First of all, please tell us more about the “power of awakening” that Sora needs in order to rival Master Xehanort?

Nomura: There are some characteristics, but to put it briefly, it’s "the power to restore a heart that is not in its normal state". “You can open a closed one, and recover it from there”. In KH3D, they opened the gate to the sleeping worlds… got rid of what was standing in front of the entrances and entered each world. That was also a training to get the power of awakening. However, with Master Xehanort's intervention, Sora could not properly obtain it. Therefore, at the beginning of KHIII, his goal is to regain its power.

——It means that the power of awakening is needed to prepare the Guardians of Light to counter the darkness, right? Another thing, “resurrecting Roxas” is also a goal, but what was Sora’s original idea of Roxas’ “resurrection”?

Nomura: It is to revive him as an independent personality and a body. In "KHII", it seemed that everything was resolved by Roxas returning to Sora. However, in KH3D, Sora was in contact with Roxas' heart and memory, and conveyed the thought that "Roxas should exist as Roxas". Sora thinks that his resurrection is necessary for the fact that Roxas himself has a heart, that there is someone waiting for him (Axel), and this time to borrow his power as a Guardian of Light.

——KHIII is a work that will become a milestone of the series, but the series itself will continue, right? While KHIII solves many mysteries, new questions arise…

Nomura: Of course it will continue. While the Dark Seeker saga ends, if you include KH Union Cross the series are not complete in itself. Regarding future plans, you will be able to see and enjoy the epilogue (releases on January 26) and the secret movie (releases on January 31). I think that your imagination will be aroused.

——Are there conditions to unlock the epilogue and secret episode?

Nomura: Since the epilogue is shown after the ending, if you download it after its release day, the 26th, you can watch it after finishing the game. The Secret movie will be released on the 31st, but the unlocking conditions will be related to the number of "fortune marks"/"Marks of Fortune" photographed. [T/N: These items might have an entirely different name in the final localised English version.]

Nomura: Depending on the degree of difficulty you choose at the beginning of the game, the number of pictures you’ll need will differ. If you are in the easiest "Beginner" mode you need to shoot all of the marks, but it’s okay if you miss some in "Standard" or "Proud" to a certain extent. The amount needed in Proud mode is quite small, but I think Standard mode is not that severe, either.

▲ Fortune marks/Marks of Fortune are located in various places, and rewards are given when you take pictures with them. As you can see from this picture, it is skilfully hidden in the background!

――Are there any other conditions?

Nomura: No, the only condition is the number of shots taken with the Marks of Fortune. This time, the secret movie can be seen without satisfying multiple conditions.﻿

Translations are courtesy of KH13 staff member Mio-chan! As stated above, we will continue to publish more of this lengthy interview as soon as we can!

Follow our coverage of Kingdom Hearts III here and on social media!